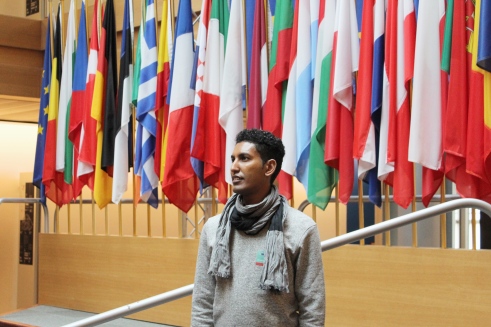 The European Parliament is meeting in Strasbourg this week to vote on a resolution on the situation in Eritrea. For several days Members of the European Parliament (MEPs) met and discussed about a country that is in the spotlight due to its disgracing human rights record. Today, we met Zekarias Kebraeb, a 30-year-old former Eritrean refugee who lives in Germany.

Zekarias left his native country in 2002 when he was only 17 years old. He wanted to become a journalist but the government would not let him realise his dream. He talked to us and to MEPs about his long and dangerous journey through Europe, the only way he could escape from a dictatorship and from a National Service that he describes as “endless”.

EEPA: Hi Zekarias, could you briefly tell us about your journey through Europe?

Zekarias: I decided to leave Eritrea after high school, in 2002, to avoid the limitless and endless military service. My only possibility was to go to Sudan, I have never thought about going to Europe. So I bought a false military ID and I contacted some traffickers when I was at the border. At that time it was cheap, the trafficker asked me 300 dollars and we then walked for 12 hours to reach Sudan. Unfortunately, after 6 months I had to leave Sudan because I was living illegally and I was facing deportation. That’s how my long journey to Europe began, passing through Libya, Italy, Switzerland and ending in Germany.

EEPA: What happened when you arrived in Germany, did you ask for a refugee status?

Zekarias: I arrived in Germany in 2004. I was a refugee until 2011 so I lived for almost 7 years in a village that I couldn’t leave; I had no freedom of movement. Eritreans were not recognized as refugees at that time. In 2011, I published a book that tells how I survived the journey from Eritrea through Europe. The book explains what it looks like to seek asylum in Europe. Afterwards, I was recognised as a political refugee.

EEPA: What does it mean to be a refugee?

Zekarias: No one wants to be a refugee. Fleeing is painful as it means that you have to leave everything. When you are a refugee, you are half human. Without your papers you have no rights. But refugees should not be seen as a problem, they are human beings. Europe should not be afraid of refugees, but it should treat refugees as human beings.

Zekarias: Yes, of course. I received the German nationality in 2013. Since I am not a refugee anymore I can move, I can work, I can do everything.

EEPA: According to you, how the EU could help the people in Eritrea?

Zekarias: According to me, it is very difficult to help economically the people in Eritrea. People are not allowed to work for themselves or have a private job, they have to serve and work for the government, sometimes for their entire life. The problem is that the EU cannot help the Eritrean people without helping the Eritrean government as the government controls everything. Moreover, building hospitals and schools sounds like a good thing to do but students, teachers and doctors are leaving Eritrea so it doesn’t make any sense. People are leaving the country dramatically and quickly. I’m seeing the entire nation on its way to Europe but I don’t like that, I’d like to keep Eritrea as a nation. This is my identity and I don’t want to lose my identity.

EEPA: So what is your main message today at the European Parliament?

Zekarias: It is important for me to be here to give information about Eritrea. Most people in Europe don’t even know where Eritrea is located on a map. It is a small, new and poor country.  However, it is important to tell the European Parliament that the problem of Eritrea is not an economic one; people are not fleeing the country because they need more money but they leave because of the regime so it’s a political issue. The only thing that Eritreans need is freedom. Eritrea is naturally a rich country, with a small population so if Eritreans can live freely, no aid is needed.

This article was originally published on epee.be on March 9, 2016