On the 11th and 12th of December 2018 the Egyptian police conducted raids on Eritrean refugees’ residences in the district of Ard el-Lewaa (where most of its residence are Eritrean Refugees) and arrested youths for allegedly  not holding the UNHCR cards and held them in the Ajuza police station. 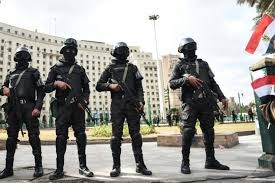 Previously similar raids were conducted by the police in Ain- shames District against Eritreans in which Eritrean asylum seekers holding white cards were detained for several days and some of them for two to three months.

Africa Monitors has a list of names of 5 people who are the victims of such acts but decided not to disclose their names for the sake of their safety.

The main problem is that the Egyptian police appears not willing to recognize the white card as a legal document which is issued by UNHCR mainly to the Eritreans and other non-Arab nationalities. When the Eritrean community representatives complained about the raids and arrests to the UNHCR officials in Cairo, the responses they got from the UNHCR officials is that the Egyptian government’s policy is that it accepts the direct issuance of the yellow cards only to the Yemeni and Syrian nationalities without being required to present the required documents as it is the case with Eritreans. In the case of Eritreans only unaccompanied children qualify for the yellow card without being required to present the national ID or birth certificate. Due to this discriminatory policy Eritrean asylum seekers are becoming victim of detention and robbery.

Worse, after the arrests, the detainees are forced to leave their phones, wallets, keys, ornaments and belts outside the cells. When they get released their smart phones and other valuables are not given back to them as it is the case with the other items. When they report the missing items to the detention facility authorities, they are told to come back the next day or after some days. When they come on the set dates, instead of being given their items, they are told again and again on other dates. The police uses such tactics to frustrate them and to make the give up. After coming for several times to the police in vain, they lose hope and give up. In this way their properties are basically being seized by the police. This seems corrupt acts by the police officers to gain economic advantage by looting the properties of the very asylum seekers, they are meant to protect.

Such violations by the Egyptian police against Eritrean refugees and asylum seekers are being committed repeatedly amid the complete silence and inaction of the UNHCR office in Cairo despite the many complaints it received on the matter.

One of the victims, Ahmed (pseudonym) lost his smart phone as the result of such acts by the police. Although he reported the looting of his smart phone to many humanitarian organizations in Cairo, his complaints fell on deaf ears. Another victim, Kidan (pseudonym) who lives in Ard el-Lewaa narrates her ill-treatment by the Egyptian police in Cairo, saying

On the 1st of October 2017 I was held in Ajuza prison for ten days. How we ended into that situation was that we had entered into job contractual agreement with a Sudanese and an Egyptian men. According to the contract we were hired and were to be paid salary on monthly basis. Based on this contractual agreement, from Ard el-Lewaa, they transported us to a military camp which is located in Muhandseen district (not far from Ard el-Lewaa). Upon our arrival, the soldiers seized our mobiles phones and our UNHCR ID cards and forced us to sleep in the camp for that night. The next day they sent us to Niyaba police and the Niyaba police transferred us to Ajuza prison in which we had been detained for ten days. There we were ill-treated. After tend days they but never gave us our properties. At the time of our release, they told us to come back after 40 days in order to be handed over our properties. But after 40 days they gave us only the UNHCR ID cards and sent us back and until this day we have never seen our mobile phones.

Another problem I faced was when I went on my appointment to Tahrir complex in order to renew my residence permit. There, the officials asked me to bring the last report of my release from the prison facility and returned me to Niyaba giving me a prison paper, holding information which include my name and my UNHCR file number. When I went to the Niyaba police, the police told me to report back after a month having with me 1000 Egyptian pound (about 56 usd) and a lawyer in order to help me close my file with the prison. Since that time I felt betrayed and got tired moving from here to there in search of a party that can help me. I reported my situation to the UNHCR office as well us StARS (Saint Andrew Refugee Service) requesting them intervene and help me. But a year passed without any positive outcomes. Now have I prepared this letter (attached bellow) and I am planning to hand it over to the Eritrean refugee community representatives to help me in solving my problems.

Salih and Idris (both pseudonyms) were also subjected to similar treatments in the hands of the police in Cairo. And the outcome is that they have been denied the residence permit because their files with the prison have not been closed yet and following their arrests in one of the raids operations by the police that took place in Ain Shames. Although they reported their problems to the UNHCR office several times, they did not get any help towards addressing the problem. As the result, they are living in fear and their freedom of movement have been restricted.

Authors note: The attachment was removed by the author to maintain the anonymity of the subject.